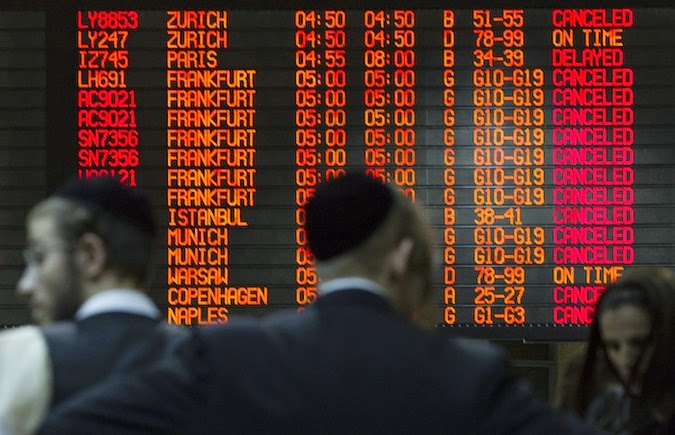 -
Ben Gurion Airport, as a symbol, represents Israel's gateway to the rest of the world, where it participates in business and diplomacy like most any other nation. Place in peril the facility that services 90 percent of the country's incoming and outgoing passengers from Europe, the United States, Asia, and myriad places where the country maintains ties for its prosperity and you've got a problem.

The country already feels under siege," Danin told The Wire. "Now with this new dimension added, people can't get out or in."

With few commercial planes flying into and out of Israel right now, even if business is only paused temporarily, the crisis has other upshots.

In the short term, the effect is probably marginal," Danin told The Wire. "But the psychological effect is quite profound. Israel is a very small country that relies mostly on aviation for its economy. The impact on the Israeli psyche is quite important."

Elis says that if things return to normal quickly, the effect will be minimal. If they don't, however, he pointed to two major facets of Israeli life that the flight ban would impact. An obvious first one is tourism.

"Tourism is really secondary to the security situation," he said. "It's not like Egypt, which is heavily dependent on tourism. But it's still one or two percent of the GDP, which is something you don't want halved."

He added that 30 percent of next month's tours to Israel have already been canceled in the wake of the violence. The big one, Elis added, was the perception of Israel in the business world.

If businesses feel like Israel is a dangerous place, that's a really big deal and an unfavorable outcome. But a 24-hour ban won't lodge that image."

If it's longer than 24 hours, it could have a real effect on the economy and Israel's confidence."