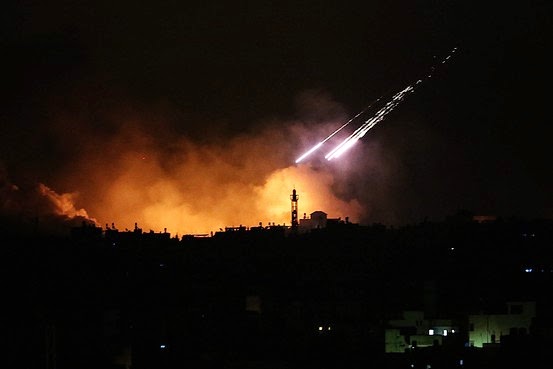 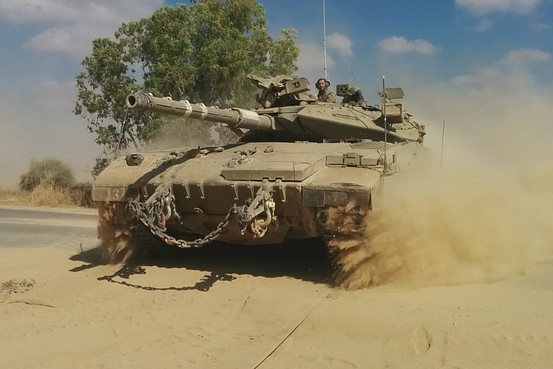 An Israeli tank heads toward the Gaza Strip on Saturday as Hamas militants infiltrated the border twice alongside kibbutzim nearby. Joshua Mitnick
KIBBUTZ EIN HASHLOSHA, Israel—The region around this Israeli border kibbutz became a war zone on Saturday, with jeeps full of combat soldiers rushed to the frontier and kibbutz residents put on lockdown, as Hamas fighters infiltrated Israeli territory two times.
Military police shut down roads opposite the central Gaza Strip and kibbutzim were declared a closed military zone amid concern that Gaza militants were en route to ambush the string of agricultural communities that are just a few hundred feet of fields away from the border.
Members of Ein Hashlosha, Nirim, Re'em, Kissufim and Sufa remained in their homes for 2½ hours Saturday morning with doors and windows locked, waiting for an update on the infiltration alert. Two soldiers patrolling the border near Ein Hashlosha were killed by an antitank missile and gunfire, and residents of the kibbutz said they heard it all.
"We hear all of the military's operations at the border. Our houses are very close to the border," said Danny Cohen, head of the emergency team in Kibbutz Ein Hashlosha in an interview with Israel Radio in which he described the first infiltration Saturday morning. "What happened was the realization of one of our biggest fears recently—penetration of terrorists very close to the [kibbutz] homes."
View Slideshow 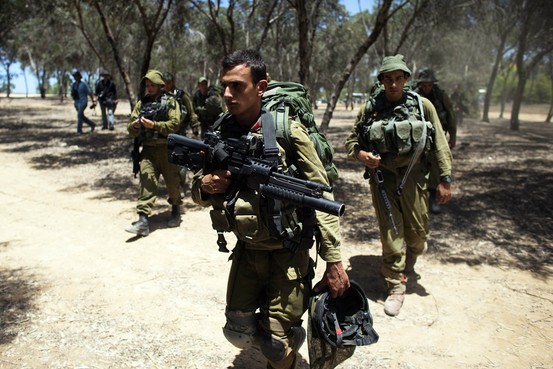 Israeli soldiers carry their gear toward a staging area outside the Gaza Strip on Friday. Meanwhile, Israeli gunboats lit up the sky with their fire before dawn, while helicopters fired into the coastal enclave. Hamas fired mortar rounds at invading troops and rockets across the border. Reuters
The morning attack marked the worst blow to the Israeli military on its side of the Gaza border since the day in 2006 that militants succeed in kidnapping an Israeli soldier and killing two others. It highlighted the potency of Hamas' network of border attack tunnels: the Islamic militants penetrated Israeli territory three times in three days and want to open a new front in the battle against Israel by targeting the border kibbutzim.
"They want to move the war to the Israeli side, this is different,'' said Yossi Melman, an Israeli military historian. "Hamas is much more of a standing military outfit than they used to be. In terms of their combat posture, they've improved.''
For years, Israel's border farming collectives have become used to serving as the first line of attack for rockets and mortars from Gaza militants. During periods of escalated tension, they are put on order by security authorities to stay within 15 seconds of rocket shelters in case of an alert siren.
The threat of infiltration, however, is a relatively new and unfamiliar one. Frightened by an infiltration on Thursday in which 13 Hamas fighters emerged from a tunnel but ultimately retreated, families with young children cleared out of the kibbutzim for the weekend, leaving them relatively empty on Saturday.
Defense analysts said the threat of the cross-border attack tunnels is even more potent than Hamas's rocket arsenal because of the risk of mass casualties or a kidnapping from the border. Israel's military said destroying the Hamas tunnel network has become a main goal of their ground operation into the Gaza Strip, in addition to stopping rocket fire.
"Most of the people are not here, after the tunnel and all the bombing all around us,'' said Hadas Gronshpan, a member of the emergency response team at Kibbutz Sufa. She said she got the alert of the infiltration through a text message. "We can't take our eyes off the news," she said. "We try to do something else, like reading or watching other channels, but it's not working. You can't concentrate on doing anything. We're just passing time."
The lengthy border region has become a staging area for Israeli military forces: open fields were turned into parking lots for tanks and armored personnel carriers. With the silhouette of Gaza's cityscape just a few miles west on the horizon, groups of ground troops got briefings for upcoming missions. 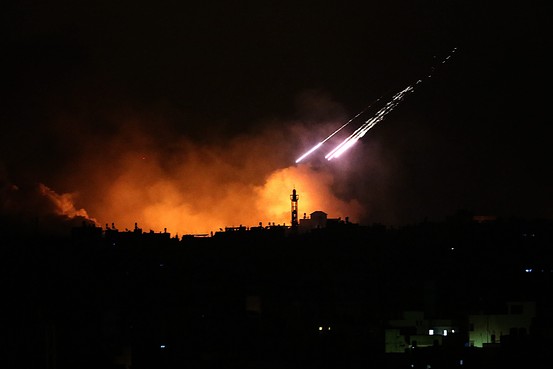 Israeli strikes seen in the east of the Gaza Strip along the border between Israel and Gaza City early Sunday. European Pressphoto Agency
"I'm anxious, scared,'' said Aviram, an armored personnel carrier driver who didn't give his last name because he wasn't authorized to speak to the press. He had gotten orders to raid a house in Gaza City where intelligence suggested was a site for the assembly of rocket attacks. "I'm a little bit bummed, because I've been separated from my friends in my unit," Aviram said. "They're already inside."
Hours after the morning attack, soldiers in combat gear at the entrance to Ein Hashlosha refused entry to nonresidents. Repeated blasts of Israeli artillery fire could be heard. At an intersection nearby, jeeps full of soldiers headed toward the border warned motorists to get off the roads. "It's dangerous out here,'' a soldier said.
It turned out to be the second infiltration of the day by Hamas militants, this time near Kibbutz Kissufim. The Israeli army said they killed two militants, who attacked a bulldozer of the combat engineers with machine guns and an antitank missile. The army said the militants were armed with an explosive belt and handcuffs and intended to take hostages.
"We are in the middle of another incident. It began an hour ago," said Haim Ben Ari, the spokesman for Kibbutz Kissufim, reached by telephone. "I really hope our forces inside the [Gaza] Strip can locate all of the tunnels, and that we will go back to living the normal lives we were living three weeks ago."
Posted by Editor at 09:56