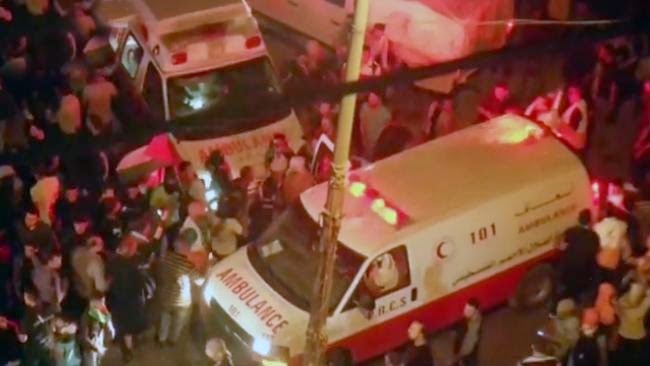 10,000 Palestinian protesters have marched on an Israeli checkpoint, sparking clashes with the military 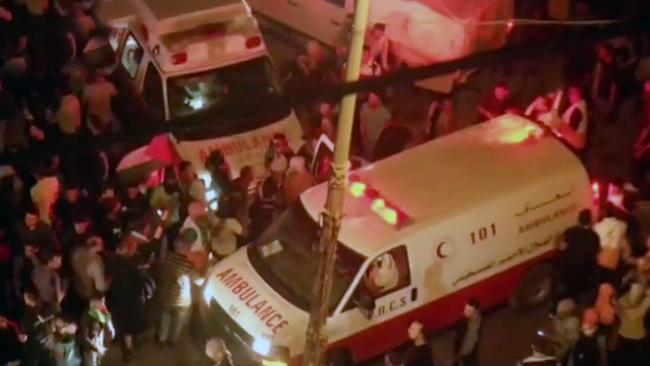 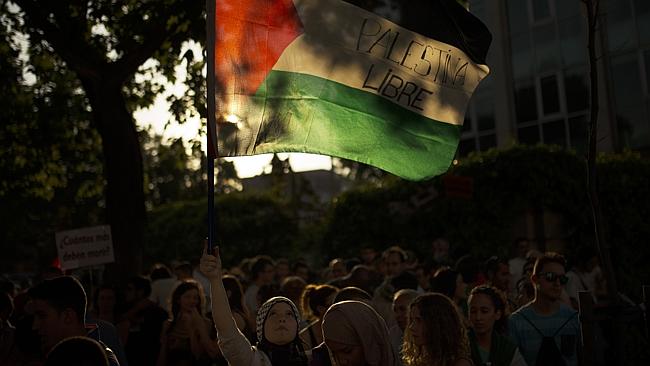 Start of the march ... A protester holds a Palestinian flag that reads: "Free Palestine" during a demonstration against the Israeli air strikes of the Gaza strip in front of the Israel Embassy, in Madrid, Spain. A protest involving more than 10,000 Palestinians at the border with Israel has this morning turned violent.
AT LEAST 10,000 Palestinian protesters have rallied and are clashing with Israeli military forces in and around Jerusalem following an attack on a UN school..
The main clash site is at Qalandiya, between Jerusalem and Ramallah, though there are now reports of uprisings in the Old City portion of Jerusalem itself.
The demonstration comes just hours after 15 men, women and children were killed and more than 200 injured when a school operated by the United Nations came under attack in Beit Hanoun.
WHAT IT’S ALL ABOUT: Understanding the Palestinian / Israel conflict
The continuing fighting sparked a massive street protest in the West Bank, raising the possibility that Israel could face disturbances in areas where Palestinians and Israeli settlers often live in uncomfortable proximity to one another.
Palestinians reported as many as four people were killed when Israeli forces used live ammunition to disperse a crowd of thousands that had marched on a checkpoint between Ramallah and Jerusalem, and there were reports of Palestinian protests near Jewish settlements in Arab neighborhoods of Jerusalem. Police said 39 people were arrested in Jerusalem.
The protest is being described as the largest in decades,
Israeli army officials have told AFP news agency that “riot dispersal means” were being used to control the protest. Social media images from the scene show water cannon in use.
She said: “There are thousands of rioters there. They are rolling burning tyres and throwing Molotov cocktails and fireworks at soldiers and border police.
“The soldiers are responding with riot disposal means.”
Police spokesman Micky Rosenfeld said several officers were injured by rocks thrown at them in Jerusalem and that about 20 protesters were arrested.
Israeli forces confronted Palestinian marchers near the old walled city at a disputed holy site.
The Palestinian death toll from Israel’s three-week old campaign now stands at more than 760.
The World Health Organisation has called for the creation of a humanitarian corridor to evacuate seriously injured people from the territory and bring in life-saving medical supplies.
More than 4,500 people have been injured since the start of the Israeli offensive, according to local health officials.
``The coping capacity of health professionals is completely overstretched,’’ WHO said in a statement. ``With the intensification of this conflict, WHO fears the health system will collapse.’’The Israel and Hamas social media propaganda arms are in full swing, with both sides claiming the other has opened fire.
Protests on this scale have not been seen since the Intafada uprisings of 2000-2005.
SCHOOL ATTACK ‘SPARK’
A UN school in Gaza crowded with hundreds of Palestinians seeking refuge from fierce fighting came under fire last night, killing at least 15 civilians and leaving a sad tableau of blood-spattered pillows, blankets and children’s clothing scattered in the courtyard.
Palestinian officials blamed Israel for the shelling, which wounded dozens and came on the deadliest day so far of the current round of fighting, while the Israeli military said it was investigating the strike and raised the possibility the compound was hit by Hamas rockets amid a marked increase in Islamic militant attacks in the area.
UN Secretary-General Ban Ki-moon angrily denounced the attack, saying the killing must ``stop now.’’
But the frantic diplomatic efforts spanning the region were running into a brick wall: Israel demands that Hamas stop firing rockets without conditions, while Gaza’s Islamic militant rulers insist the seven-year Israeli-Egyptian blockade of the territory must end first.
``Many have been killed - including women and children, as well as UN staff,’’ Ban said in a statement, though he did not elaborate and a later UN communique made no mention of humanitarian workers being among the casualties.

ONGOING BATTLE
The Gaza war now in its third bloody week
Israeli tanks and warplanes bombarded the Gaza Strip again overnight, as Hamas militants stuck to their demand for the lifting of an Israeli and Egyptian blockade amid international efforts to broker a cease-fire.
Six members of the same family and an 18-month-old infant boy were killed when an Israeli airstrike hit the Jebaliya refugee camp in the early morning hours, according to Gaza police and health officials. Twenty others were injured in the strike, they said, and rescuers were digging through the rubble of flattened homes, looking for survivors.
An airstrike on a home in the southern Gaza town of Abassan killed five members of another family, said Gaza health official Ashraf al-Kidra. Abassan is near Khan Younis, in an area that saw intense fighting on Wednesday.
The 16-day conflict has claimed the lives of 760 Palestinians, most of them civilians, Palestinian health officials say. Israel has lost 32 soldiers, all since July 17, when it widened its air campaign into a full-scale ground operation it says is aimed at halting rocket fire from Gaza and destroying a sophisticated network of cross-border tunnels.
Two Israeli civilians and a Thai worker in Israel have also been killed.
More than 2,000 rockets have been fired at Israel from Gaza since July 8, and the Israeli military says it has uncovered more than 30 tunnels leading from Gaza to Israel, some of which have been used by Hamas to carry out attacks.
PRESIDENT PERES RESIGNS
The clashes come just hours after Nobel Peace Prize laureate Shimon Peres ended his term as president of Israel.
Peres, a man who symbolised hopes for peace, capped his seven-decade public career amid the brutal reality of war.
Peres handed the ceremonial but high-profile presidency over to Reuven Rivlin, a legislator from the hawkish Likud Party.
Although the globetrotting elder statesman has made clear he has no intention to retire, few expect him to hold public office again, after a career that dates back to the 1940s and has seen him occupy almost every major government position in the land.
MORE TO COME
Gaza conflict